Balanced line with open wire feeders and a doublet makes a very nice multi-band system. I have been using one for years. It consists of three parts:
After using the open wire system for a few years, I had mixed results. The antenna tuner that I used was the common Z-match variety. The Z-match left a lot to be desired. The tuning was very touchy. One of the capacitors was floating and the range was severally limited.

Many of the tuners that we use are not really balanced and as a result, they don't work too well. AG6K wrote an very straightforward article on the trouble with most of the antenna tuners that we use for open wire feeders. They aren't really balanced at all. Here is the full article if you want to read it https://drive.google.com/file/d/0BzRNYeu10K6DX3AtNXVEV2oyNkk/view?usp=sharing. (Warning: I have downloaded this from the Internet and I assume that it is allowable to share it).

With the Minima transceiver's development getting into testing phase, There was a need to spruce up the multiband ops at VU2ESE. I really wanted to try the Balanced balance line tuner. However, the original article required two rolling inductors that were mechanically couple to tune together. I didn't even have one! These are very expensive and not easily available. Hence, this is a simpler version of that famous tuner.

First order of business is to have a decent way to measure the mismatch between the transceiver and the antenna system. The SWR bridge used in this tuner is resistive. That means that it shows very little variation of in the SWR to the transmitter. This protects the transmitter from high SWR. Often, the QRO tuners can't use such a system as the resistors would dissipate most of the RF energy. Whereas, if we tune at QRP levels, this system works very well. Here is a tip: You can use this tuner for QRO work too. Just tune at less than 10 watts and then switch to high power.

Second part is the balun. I have just stacked up two FT37-43s as I don't intend running more than 10 watts for now. You can build a better balun on a larger ferrite toroid or just wrap turns 10-20 turns of a good quality coax on a large PVC pipe (more than 3 inch diameter). Use anyone end of the coax as the balanced and the other as the unbalanced end, it is all the same

Third part is the matching network. The simplest matching network is an L-network. An inductor between the two ports to be matched and a capacitor between the higher impedance port and the ground. For a balanced line, we need two L-networks : one for each side. The original design of AG6K used a variable inductor. Instead, we use seven switchable inductors in place of each tunable inductor. These inductors are of the value 6.4uh, 3.2uh, 1.6uh, 0.8uh, 0.4uh, 0.2uh and 01.uh. By switching them selectively, we can synthesize any inductance from 0.1uh to 11.9 uh in 0.1uh steps. 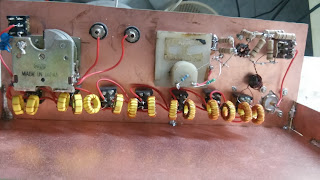 This was built using copper clad boards as the chassis. The layout was done in a straight line. As a result the tuner is about 9 inches wide and 3 inches high. The hard part was the mechanical work. Drilling all the hole and fitting the connectors, the meter etc. took time.

An old meter from a tape recorder was used. Depending upon the sensitivity of the meter you use, you may have to change the 10k resistor that is in series with the meter. Apart from that 10K resistor, all the other resistors are 100 ohms, 2 watt resistors.

Once all the chassis is ready, the rest can be built in a single evening.

If you are operating QRO, you might burn up the resistors of the bridge if you transmit with the switch set to Tune position!

The new ATU in the shack is very smooth. It tunes everywhere on 7, 14 and 21 Mhz (my principle bands of interest). I have loaded it on 3.5 MHz and 28 MHz as well with my 51 feet doublet. A plan is to make a lightweight open wire feeder with 2 inch spacing using copper enameled wire and some lightweight spacers to make a portable station for some backpacking along with this ATU.

Though meant for balanced lines, there is no reason why this can't be used for unbalanced lines too. You can skip the balun and use just one side to feed a random wire antenna, a dipole or a vertical.

An ultimate version would be to make an Arduino based automatic tuner that replaces the switches with DPDT relays and the tuning capacitor with a set of eight capacitors, making this an automatic tuner. Radio Artisan has a similar system. For now, this is a simple system that works very well.