Homebrewers usually limit themselves to 5 watts or less. Frequently, there is a need to increase the power beyond those few watts. Described is a very simple, very stable amplifier that will provide 25 watts on any two HF bands. It takes a few evenings to be put together. Most of the parts are already in your junk box.

For most QRPers, 25 watts is substantial power. If you keep your antenna losses down, your effective radiated power will be on par with the 100 watt transceivers feeding modestly fed dipoles.
On the other hand, 25 watts is achieved far more simply with a single IRF510, far more cheaply than what it takes to build a push-pull amplifier that will provide just another 3db advantage at 50 watts or more.

If you want only CW operation, you could get even higher power at 24 volts. Miniboots by Wayne NB6M is just the thing for the CW-ers.

Simplicity, low cost, easy of duplication were the main objectives of this project

Design Notes
A single ended amplifier powered by a 24V supply was chosen. Radio Amateurs often build 12V equipment so it could be powered by the car battery. However, higher voltage supplies really simplify building power amplifiers. They naturally increase the output  power, boost linearity and need lesser driving power. SMPS supplies with 24 volts output are inexpensively available. These also have another useful feature – they have current limiting. This can protect your IRF510 from blowing up. There is a small preset on the SMPS that sets the exact voltage. Crank it up to the max. Our SMPS gave 29 volts.
The IRF-510's gate looks like a large capacitor to the RF input. This makes the input reactive, and it could make your QRP rig or the linear go into self-oscillations. We handle this in two ways. First, we place a 10 ohms resistor in series with the IRF510's gate. That makes the gate look more like a resistor and less like a capacitor. Then, we add an RF attenuator with two 220 ohms resistors and a 22 ohms. This makes the input quite stable and solid. Yes, you lose a watt. But it is worth the stability. You are free to experiment with different types of attenuators or different values of the series gate resistor.
The IRF 510 is a non-linear device and its output is meant to quickly swing from off to on and back again. The on-resistance of the IRF510 is controlled by the gate voltage. Thus, we have to provide the gate with a voltage such that it is barely 'on'. The RF input will make it swing within its narrow linear range. We use a 7805 to bring down the power supply voltage to 5V, then use a 10K preset to provide the DC required to bias the IRF510. As the gate of an FET consumes no current, very little voltage is required to bias it. A 10 K resistor is used. Note that the other end of the 10 K resistor has a 0.1 bypass capacitor.
The IRF510 output is very spikey. A 220 pf, connected from the drain to the ground, smoothens these spikes. The drain is powered through an RFC made from 16 turns of 22 SWG over a single FT37-43. The other side of the RFC is connected to the power line. Electrolytics along with two 0.1uFs in parallel lower the ripple from the power supply.
With improper load, the voltage on the drain can swing much higher than 30 volts. Hence, four regular disc ceramics are bunched in a 2-by-2 configuration to provide higher voltage rating.
An output of 25 watts at 25 volts  makes for 12.5 ohms output impedance. This has to be stepped up 4 times to 50 ohms. A simple bifilar transformer made out of a single FT37-43 provides the step. Note that it doubles the voltage. Hence, the output will now swing upto 50 volts each side (100v peak to peak).
The two low pass filters are switched through the RL3 relay. Using a front-panel switch with long leads often leads to stray RF coupling that can cause self-oscillations. Don't try replacing the relay with a DPDT switch. You could try making this a single-band linear by completely eliminating the band-switch.
Transmit-Receive switching is a little more elaborate than usual. Two DPDT relays are used. One at the output  and one at the input. If you carefully follow the RL1's wiring, you will note that on transmit it grounds the cable that is used to bypass the linear during transmission. This detail is important in preventing the RF from feeding back into the QRP rig or the linear's own input. The output relay uses both the poles for higher power handling.
All the relays used were the standard 12v relays with 800 ohms coil. The 1K resistor in series allows them to work with 25-30 volts. Note that the bypass on the relays is necessary. It prevents the relay coils from picking up the RF energy.
An LED indicator is used to monitor the output. Continuously lit LED will indicates oscillations. Voice modulation on SSB will accordingly make the LED flicker. CW makes it flash in unison with your keying.
The 50 uF in the T/R switch is optimized for CW and PSK. It drops during pauses during transmission. If SSB is your prime mode, then you might want to change it to 200 uF or so.

The linear with the power supply is mounted inside a metal box of 6-1/2” by 7” by 2”, originally meant for a car radio. A heatsink salvaged from an old VHF radio set was used as a heat sink. The heat sink turned out to be slightly higher than the box. Those with a keen eye for beauty may take exception to it. The linear is entirely constructed on scrap piece of copper approximately  6 inches long. One end is the input, the other end is the output. See the pictures. The layout is not congested. The IRF 510  on the edge of the board; in the middle section. It is bolted through a mica spacer and a bolt with an insualting sleeve. These are purchased as 'T220 Heatsink kit' from the local market for a few rupees.
There are several guidelines to be followed. They are all simple and probably an overkill but it is a good idea to adhere to them :


The construction details are visible in the picture below. The upper part is the input relay with the RF sensor build around it with to the top-left. The attenuator is to right of the hole in the board. The 7805 bias regulator and the preset in the center of the board, towards the left. The RFC can be clearly seen. The power supply decoupling electrolytics are just below the preset. The RL3 is to the left of the LPFs. Nylon tap washers were used for 14 Mhz LPF inductors. The relay on the bottom right is the RL2 for switching the antenna. Yellow wires carry 24volts, green wires carry the RF, red wires do the T/R switching. The IRF is bolted to the heatsink on the right. Note the nylon washer on the bolt of the IRF510. It insulates the IRF510's tab from the heatsink. 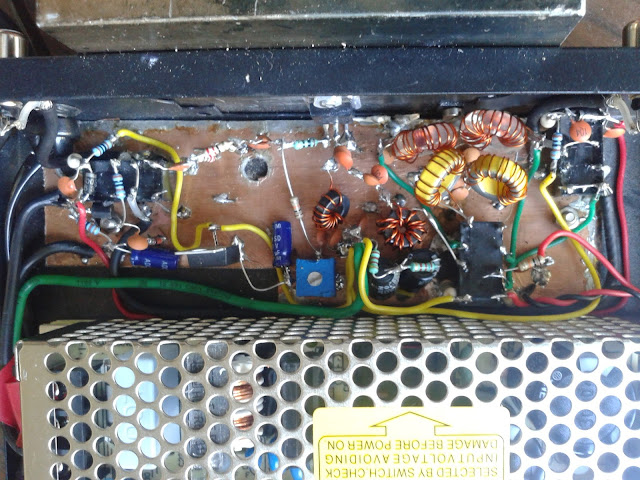 The amp with its built-in power supply is mounted inside the carcass of a car radio. It measures 2” by 6” by 7”.

Bringing it to Life

The linears are unforgiving beast. You have to approach this in baby steps. First, doubly check everything. Especially the way the relays are wired.
Now, we are ready to do our DC tests.
RF tests:
You're done!

At VU2ESE, this is now the common amplifier for all the QRP rigs. The on-the-air reports have been very encouraging. Using a two element beam, 7 countries were worked on SSB within the first hour. It broke through one particularly notorious dxpedition as well.
One may not use a linear at all times, but it is nice to be able to throw that switch when the going gets tough on the bands.

The construction details are visible here. The upper part is the input relay with the RF sensor build around it with to the top-left. The attenuator is to right of the hole in the board. The 7805 bias regulator and the preset in the center of the board, towards the left. The RFC can be cleary seen. The power supply decoupling electrolytics are just below the preset. The RL3 is to the left of the LPFs. Nylon tap washers were used for 14 Mhz LPF inductors. The relay on the bottom right is the RL2 for switching the antenna. Yellow wires carry 24volts, green wires carry the RF, red wires do the T/R switching. The IRF is bolted to the heatsink on the right. Note the nylon washer on the bolt of the IRF510. It insulates the IRF510's tab from the heatsink.

This linear came about as an adaptation from Rick's and Wes's works.